Although we recently broke a Trump cover-up story for our readers, we now have some proof that Donald Trump does not lie … at least about his hair. It is definitely his own. If you haven’t seen this yet, take a look …

As Trump boards Hair Farce One, the truth is revealed about Trump’s hair. It’s his, what there is left of it. You may have seen him challenging people in the past to check out his hairline.

Yes, that is his real hair in the front of his head. It just is in a different spot on his head than where it was originally. Now we can see that a lot of the hair in the front may have come from the back, which is ironic since now that hair that used to be in the back has to be grown long in the front to be able to be swooped back over the now bald back. Whew! That’s enough work to make a follicle flounder. 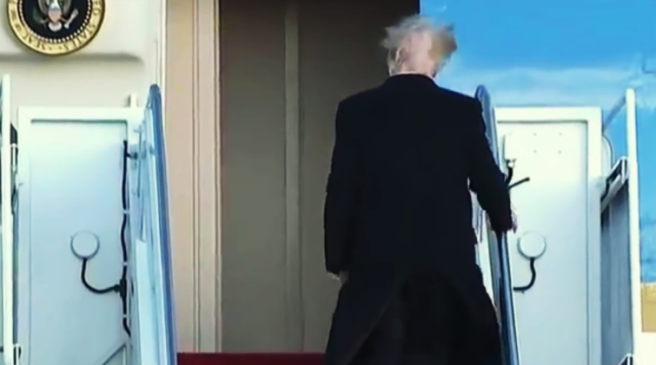 The bottom line though is that Trump did not lie about his hair. It is real. There is no way that a purchased rug could look as bad as his real hair does. And I also believe that there is no Russian collusion regarding his hair. Russians do much better work here in the USA than that hairdo. Just take a look at the 2016 presidential election.