A few posts back, I mentioned that I needed to make a decision between walking with a cane and training for a 5K race. I decided on the 5K race. I soon came to regret that decision this past Saturday.

I injured my right knee while walking the dog on Saturday. Then I further injured it while walking through the store to purchase a knee brace. Why would I need a knee brace? So I could go on a planned run Saturday afternoon which went well with minimal pain. The brace worked! And then my knee inflated like Trump’s ego at one of his rallies.

This is not my knee, but this pic is highly representative of what mine looked like. 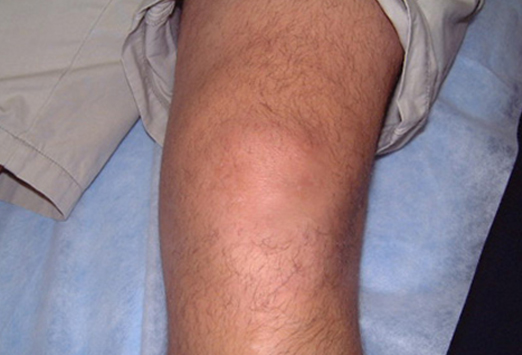 The kneecap is under there somewhere. So, I rested and iced and expected it to get better quickly. Nope. There was no way I could exercise and do my deep knee bends.

We jointly decided on a treatment protocol and this is what she pulled from my knee. 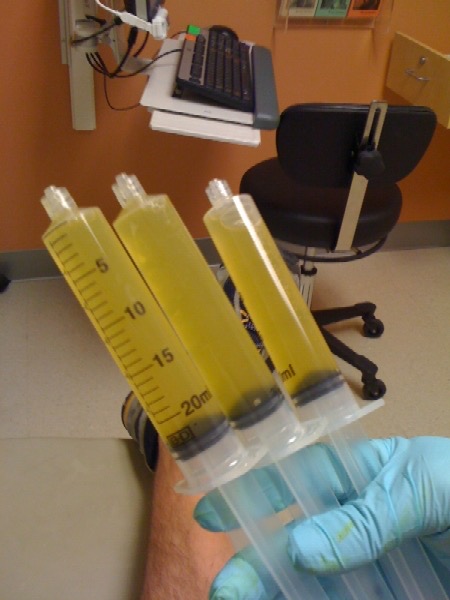 70 ml of fluid, and then she pumped 5ml of cortisone back in. That pic is not my fluid, but it looks just like what she pulled from my knee. She described it as healthy fluid if it looks like Mountain Dew. That’s the first time the words healthy and Mountain Dew have ever been used in the same sentence. I wanted to take a pic of my fluid (two 35ml syringes full), but the doctor started to get weird with me when I asked to take my fluid home to gross-out my family. She told me the most she could do is look away when I take a pic of my knee’s digital image.

That is my knee in a pic I took, but I had taken the pic before she gave me her less-than-enthusiastic approval to secretly take a pic. Do they have cameras in the exam rooms? Hmmm. Mental note to keep my pants on next time, which is what the doctor suggested, too.

I made a new decision to correct that 5K decision. I have officially hung up my running shoes.

I guess I could have just put them in my closet so I could still use them for walking, biking, etc. I immediately regret that decision.

7 thoughts on “A Decision I Kneeded to Correct”