Each week I am changing my family league fantasy football team name and logo to tweak my Trump-loving relatives in the league. Last week, this guy’s mug was the logo for my team, the Mueller Marauders.

You can read the details HERE.

This week, I was stymied. I had a team name of the Sanders Raised Eyebrows planned, but there is a character limit on team names. “Mine is too long,” I said for the first time ever.

However, I am happy with my alternate choice for this week.

I am pleased to have my family league fantasy football team head into battle this week as the Hurricane Towels with this team logo. 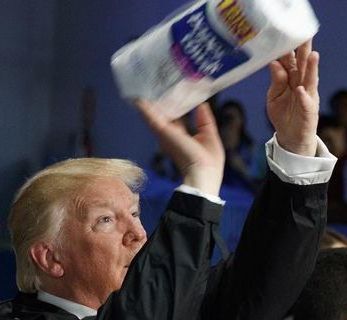 Of course, that scene is after the devastating hurricanes rocked Puerto Rico last year and Trump “helped” by flipping paper towels into the crowd. With Hurricane Florence bearing down on the Atlantic coast of the USA, I figured a hurricane-themed name is appropriate.

It is also appropriate because a nephew of mine has a team in our family league named Hurricane Ditka after the famous Saturday Night Live sketch featuring the Sportswriters (George Wendt, Mike Myers, Robert Smigel & Chris Farley) raised the question of who would win a fight between (then) Coach Ditka of the Chicago Bears and a hurricane, if the hurricane is named Ditka. You can enjoy the whole sketch HERE or skip to the 4 minute mark for the hurricane question.

And no, we don’t all talk that way in Chicago, although some of dem’ guys over ‘dere does. We never really get an answer to the question of the winner of Coach Ditka vs. Hurricane Ditka since Todd (RIP Chris Farley) has another heart attack shortly after the question is raised.

Maybe Todd needed to cut back a bit on the pork chops or at least chew them a bit before swallowing.

I’m looking for wins this weekend from Da’ Bears and the Hurricane Towels. No choking this week.