I fancy myself an idea person, although I readily admit that most of my ideas are bad. I like to think that I have had so many bad ideas in my life that I have become a pretty good judge of ideas. I’ll give you an example.

Area Democrats are marching in the local St. Patrick’s Day Parade this Saturday. I will be marching with my daughter, unless it is too cold, or rainy, or if she gets a better offer. Then I’ll be proudly walking without my daughter and just with my fellow Democrats, flipping off anyone in the crowd with a MAGA hat on. Just kidding. I wouldn’t do that. But a MAGA-hatted parade watcher was flipping off Democrats in the last parade I marched in. Those MAGAts are class acts.

Anyway, a fellow Democrat offered the following ideas for the parade via email … 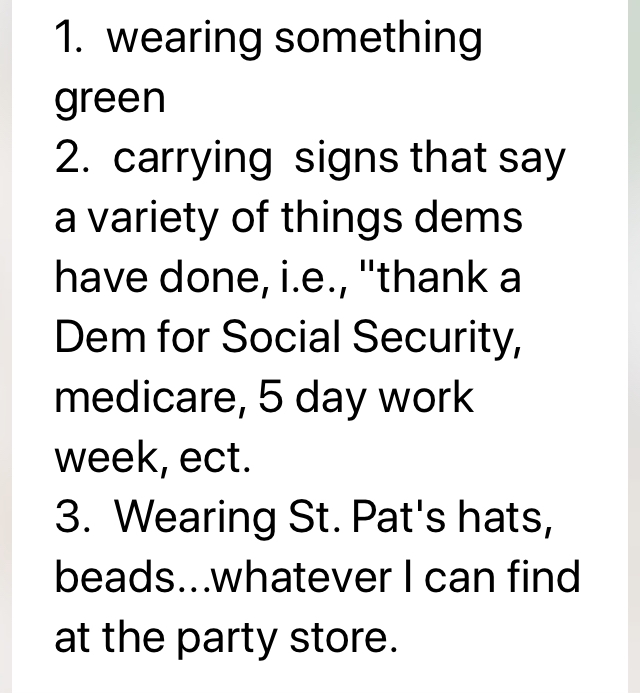 Okay, so an obvious idea, but a good one nonetheless.

#2 is again a bit obvious, but a definite solid idea.

I can only say “Huh” again to the extreme level of obviousness in #3, although I have a suggestion for the beads idea that can tie-in a bit with Mardis Gras. If people in the crowd throw me beads, I’ll keep my shirt on.

Anyway, although obvious ideas, they are good ideas. Now here’s an example of bad ideas.

My former boss floated past me some ideas in an attempt to acquire my small medical equipment business that I have toiled at for the last eleven years. I have copied and pasted his plan below with company names changed to protect the stupid. My editorial comments follow in RED between parentheses.

Third, Jim Flanigan agrees to merge his Company, ABC, into XYZ, at no cost, and (OK, hold on. No cost? I get nothing for my company? Bad idea. Oh wait, there’s more. Maybe my reward is coming up. Patience, Jim.)
(a)  Agrees to become a Vice-President of XYZ, and (Great. I get to go from Owner of my own solvent company to VP of a company in financial trouble with an FDA cease & desist action pending. Definite bad idea.)
(b)  Agrees to become a 10% Owner of XYX, at no cost, and (I see how well this works because 10% of a debt-ridden company > 100% of a debt-free company. Genius idea.)

(c)  Agrees to remain in the Chicago area as XYZ’s Midwest Distributor, and (Well, I have no plans to move from the Chicago area and I do distribute XYZ’s product, so I guess I could agree to continue to live here. I can’t call this a bad idea. It’s really not an idea at all. It just sort of mentions where I live.)

(d)  Agrees to continuing to also market x-ray processors and tables, but through XYZ, and (So I get to turn my company and the products I currently represent completely over to XYZ company. Gee, how could I refuse to be robbed blind?)
(e) Further agrees to draw no salary, but to receive his current margins on
his sales, as an independent distributor (until otherwise mutually agreed-to.)
(I guess this idea could be worse. He is asking the guy he is recruiting to run XYZ company to quit his current six-figure job and draw no salary for the first year. Zero compensation.)

My former boss is a Harvard MBA and a multi-millionaire. How does he come up with such terrible ideas? I neglected to mention he is also a Trump supporter. That may explain a lot. I’ll be wearing my RESIST button when I stop by to see him next week, mainly to remind myself to RESIST listening to any of his ideas.