Now that I am an ordained minister, I feel it is incumbent upon me to explain and sermonize about humanitarian issues like immigration. I can easily explain the basics of immigration thanks to this drawing I found on Twitter. 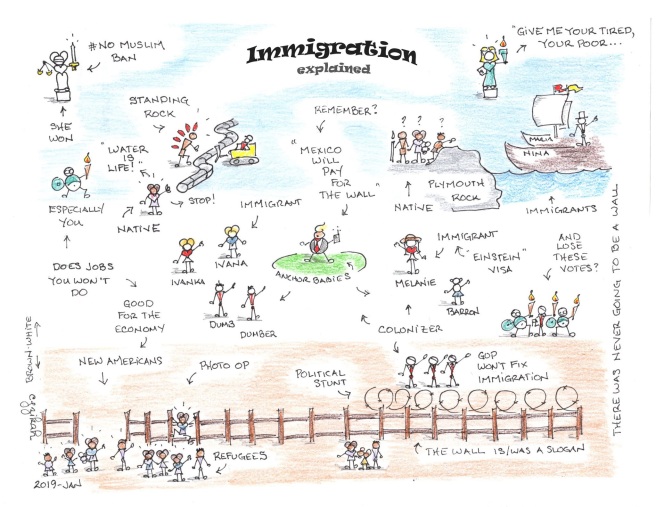 But there is so much more. For example, this picture doesn’t even begin to address the use of “unbelievable vehicles” by the Mexican drug cartels.

As captured in the following video tweet by The Daily Beast, we learn from Donald Trump that Mexican drug dealers use super-cars … “unbelievable vehicles … they have the best vehicles you can buy … stronger, bigger, and faster vehicles than our police have, than ICE has, than Border Patrol has.”

It sounds to me like Mexican drug cartels have finally commissioned production of the long-awaited Canyonero.

And so, Trump wants his Wall. I just hope that Mexicans don’t watch this 2004 commencement address by Trump, unearthed recently by The Daily Show.

And if that isn’t prescient enough for you, maybe this is. The 1958 TV series called Trackdown featured a grifter named Trump in one episode who wanted to build a wall to save a town. Here are some highlights.

Let’s hope what is predicted at the end actually happens.

In conclusion, this is about the only wall I can support.

Thanks to @Tarquin_Helmet for that last video.