This past week was historic. We went to the brink of war with Iran. The Senate impeachment trial of Donald Trump began. Documents and testimony became public showing how agents of Donald Trump conspired to remove and possibly harm former Ukraine Ambassador Marie Yovanovitch. But at Trump’s latest rally in Milwaukee, what did he identify as a danger to the USA? That’s right, household appliances. Toilets, sinks, showers, dishwashers, light bulbs, and even refrigerators. Here’s a transcript of that part of his speech or rant or dementia-addled diatribe attacking the appliances. The bolding is from me at crucial parts.

“Does anybody have a new dishwasher? I’m sorry for that, I’m sorry for that. It’s worthless. They give you so little water. Do you ever see it? Air comes out, so little water. So what happens? You end up using it 10 times and the plates that you take them out and do it the old fashioned way, right? But what do you do? You’re spending 10 times for the electricity, right?

So, I’m putting the water back. Most places have so much water, they don’t know what the hell to do with it. You know, a lot of people don’t realize that. So, dishwashers now, you’re going to have a — just as much as you’ve ever had and you’re going to use now one shot, your dishes are going to be beautiful.

But sinks, toilets, and showers, you don’t get any water. They put restrictors on, and now, they made them permanent. People used to take them out. They put restrictors on. Try going and buying a new faucet. You turn it on no water comes out, right? We won’t talk about toilets, but you know that’s going to take ten, 15 — but we don’t talk about that because I’ve said this three or four times.

The only subject they ever talk about is toilets. So, I don’t mention it. But how about the shower? You go into a shower and I have this beautiful head of hair. I need a lot of water. And you go into the shower, right? You turn on the water, drip, drip, drip. I call the guys, is there something wrong with this?

No, sir, it’s just the restrictor. So, you’re in there five times longer than you suppose to.”

Where do I start? Does air come out of your dishwasher? If it does, it is not connected properly to the water supply. And there should be water because Trump tells us he is putting the water back. From where? Where’s he been storing it? Frankly, I’m shocked that he didn’t say that Obama took the water away.

I was really interested to hear how refrigerators are jacking us around, but he just teased us. I do sometimes feel that my refrigerator gives me the cold shoulder. And what if my refrigerator and freezer team up? That’s a chilling prospect.

Before I get to the toilet talk, is this really a beautiful head of hair? 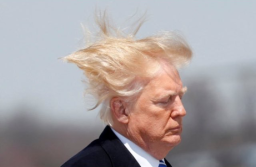 I am sure that hair doesn’t need much water in the shower to rinse.

Now, as for the toilets, he has been at war with toilets for some time now. Not as long as with windmills, but it’s gaining momentum. Even when he says he’s not going to mention toilets, he mentions toilets. Must really be a problem for him. I wonder why?

This video is “must see” and may provide us some insight into Trump’s toilet troubles.

I hope he emerges from his War on Toilets flush with success.