I wanted to release excerpts from Chapter 4 on Labor Day, but I didn’t. Uh, that doesn’t really sound like a good excuse or explanation. Pretty lame. Let’s just agree that the important thing is that excerpts from the Chapter 4 rough draft follow below.

Now for those that haven’t read along with MPTWTBP up to this point, good for you. Don’t waste your time. Go for a walk. Climb a mountain. Pick wildflowers. Take hallucinogens. Enjoy life. For those of you who are resistant to most of those ideas, but open to the hallucinogens, here are the links to the first 3 chapters. Note: Take the hallucinogens first.

This chapter is the longest, so there are many yuks, laughs, giggles, and guffaws that didn’t make it into these excepts. Take it from me … my side is still split from laughing so hard. Very messy and inconvenient though. Anyway, here we go with some Chapter 4 excerpts.

From the beginning, Ray had planned to declare his candidacy over the 4th of July weekend. He thought that would be darn patriotic and fit in well with the rest of the festivities in Okawana. Even before Iowa legalized fireworks back in 2017, the townfolk’s been gathering in the grove of trees by the diner on the 4th for a little town picnic and games. My favorite game was to see whose pet looked most like their owner. Wanda Bixley’s bulldog, Brutus, won most years I can recall. Oh, there was one year when that nerdy writer fella who bought the Pike’s old farmhouse as a quiet place to write his big, fancy novel came to the picnic. Someone nominated the fella’s goldfish since that writer had a sorta fish face with thick glasses that made his eyes look bulgy. Who knows if the guy even had a goldfish, but you can be sure that goldfish won and the writer never came back. Brutus was back to winning the next year even though Wanda was wearing her hair long at the time.

END_OF_DOCUMENT_TOKEN_TO_BE_REPLACED

There are already too many Democratic candidates for the 2020 Presidential race. So each month, I will reduce the field by one candidate through an announcement in this blog. If more keep joining the race, we may have to eliminate a candidate every two weeks. After my blog post, the candidate named in the post will be notified and expected to withdraw from the race. Maybe by the 2020 convention, we’ll have the field whittled down to a single, strong candidate to defeat Donald Trump in 2020.

The first candidate I am eliminating from the race is …

END_OF_DOCUMENT_TOKEN_TO_BE_REPLACED

Donald Trump’s campaign financial woes are no secret.  But being the resourceful businessman he is, Trump is offering some new “products” that should bring in some campaign cash.

END_OF_DOCUMENT_TOKEN_TO_BE_REPLACED 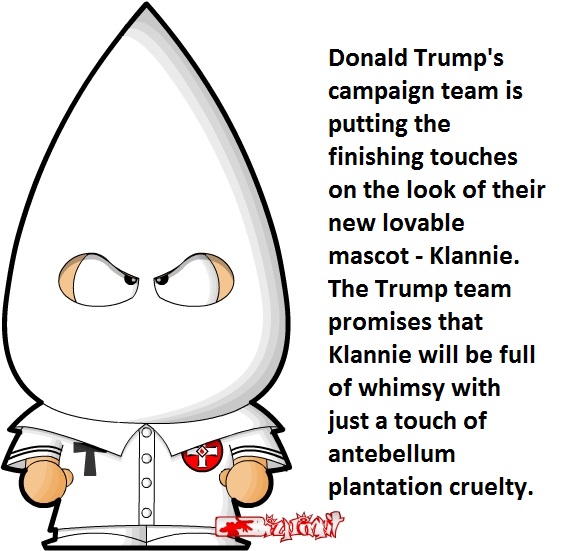 Even Jeb Bush’s logo is sad.

With the 10th anniversary of Hurricane Katrina in the news, former President George W. Bush has been back in the national spotlight. In an effort to further distance himself from his brother’s presidential failures like Katrina response, Republican Presidential candidate Jeb Bush has rolled out a new campaign logo.

Bush’s original logo has been criticized for not mentioning the Bush family name. Critics have wondered aloud if Jeb Bush is ashamed of the Bush legacy. With his new logo, the Jeb Bush campaign appears to be seeking a level of independence and anonymity heretofore never attempted in a Presidential election.

The Bush campaign rolled out the new logo at a campaign stop in New Hampshire leaving voters a bit puzzled. The new Jeb Bush campaign logo definitely makes it clear that Jeb Bush is his own man, but the question is “which man?” One local at the campaign stop remarked, “There are so many candidates in the election, anyone not named Donald Trump had better have an actual name.” When reached for comment, Donald Trump uncharacteristically could only offer, “?”

On the campaign trail today at a Misogynist Club luncheon in Cedar Hills, Iowa, Donald Trump unveiled a radical new plan that will allow illegal immigrants to stay in the USA while also helping keep our border secure.