When it comes to me, are there any other kind of thoughts? Oh well, here we go with a non-musical thought to kick this post off …

My oldest daughter tweeted this out recently …

I ate 5 pieces of garlic bread tonight. It really must be genetic.

I’d like to see a combination of singing shows The Voice and The Masked Singer where Blake Shelton’s head gets removed and his bloody neck stump is revealed at the end of the show.

I will fight anyone who says this is not an exquisite song.

I have heard XTC described as God’s apology for the Beatles breaking up too soon. With two brilliant songwriters like Andy Partridge and Colin Moulding in XTC, I heartily concur.

They say celebrity deaths come in groups of 3. I just recently publicly mourned Peter Tork’s death. Today the news came down that Beverly Owens who played Marilyn on The Munsters died. That makes 2 celeb deaths. And then I just heard that Mark Hollis, co-founder of the band Talk Talk, died. You can argue his celebrity status, but you can’t argue whether this is a great song that will make you dream while being wide awake.

Many years ago while I was skipping class at Elmhurst College, a new band called Heart was scheduled to play a concert at Elmhurst’s Hammerschmidt Chapel. I was familiar with Heart, owned their debut album, and wanted to go. However, I also wanted to avoid my girlfriend who I wanted to be my ex-girlfriend. To be perfectly honest, I used her to get a few papers typed. But that was it. Outside of the typing, I treated her well and took her on some very good dates. We sat in about the 10th row center at the now-closed Uptown Theater for the Electric Light Orchestra’s first big concert tour date in Chicago.  She had new contact lenses, so she spent most of the show looking down with her finger poking her eye adjusting the lenses. I swear I never used her for anything other than typed papers as I resisted her surprisingly forceful sexual advances. I say surprisingly since she was a PK – a preacher’s kid. Anyway, the chapel was small, she was going, and I opted against seeing Heart and possibly her. My Heart was broken that night.

Today I got the news that thanks to the world’s greatest radio station WXRT, I won 2 tickets to see Sheryl Crown and Heart in July. I guess it is not that big of a deal since I could have purchased Heart tickets at any time to see them when they came through Chicago numerous times over the past decades on their many concert tours. But I’m going to put that out of my mind and just look forward to mending my broken Heart this July 11th.

Former lead singer of the Cranberries, Dolores O’Riordan, died in 2018. The final album from the Cranberries is due out soon in 2019. A new single released in advance of the album is getting some airplay. It is prophetically called All Over Now. I get the chills every time I hear it on the radio.

Nationally famous entertainer and alleged pedophile R. Kelly calls Chicago home. We’re so proud. After his arrest last week, Kelly spent the weekend in jail after being unable to come up with $100,000 in bail money. How is it possible that someone so successful can be so broke? Friends of R. Kelly eventually cobbled together the 100 grand to spring him on Monday. Great. Friends of R. Kelly are no friends of Chicago.

My ten year old daughter made this in her clay art class. I like it and find it very soothing and interesting in an impressionistic way. 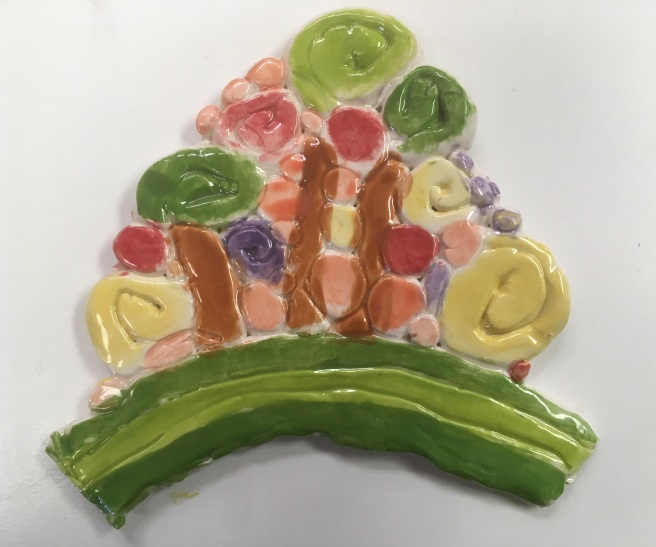 Sorry, no music or joke there, but mercifully my last random thought … for now.