While my first Brew Review involved an actual trip to a brewery in another state, this Brew Review is not that ambitious. I somehow happened to find myself in the liquor aisle of the local grocery store when I went to buy a birthday card for my wife. I (claim to) have no idea how that happened. Since my visit to the 3 Floyds Brewery that I wrote about in my first Brew Review, I have been searching for a local store where I can purchase gose beer, which is a type of German sour, salty beer. Very tasty, but very elusive ’round these parts.

Well, this one was not gose, but it caught my eye … 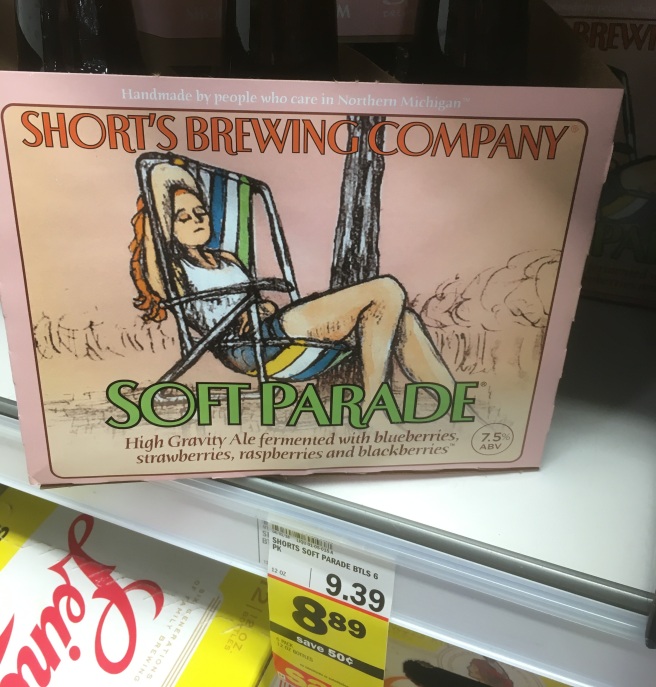 Maybe it was the relaxed summery scene. Maybe it was the 4 fruits. Maybe it was that it was on sale for 50 cents off. Woo-hoo! Now I know it does not look like a very masculine beer. I never claimed to be that manly, although I do have nice chest hair and am the father of 5 children. OK, so 3 are adopted. You got me on that one. Regardless of whether I have to manscape my chest or not, I like fruit and adult beverages containing said fruit.

So I bought one. Not one six-pack, but one beer. If I could have, I would have asked them to open a bottle so I could sample it before buying the whole bottle. Beer that I actually like tends to sit in my refrigerator for a while as it is. I like to drink, but maybe that’s because I drink sparingly. And what if I didn’t like this beer? No self-respecting guy I know will try this very feminine looking beer. Fortunately, most of my friends are not self-respecting, so I am sure I could coax it down their gullets. Anyway, I took a chance on one bottle and eagerly hurried home, only to hurry back and buy the birthday card for my wife that I originally went there to get.

Now at this point, this has not been much of a beer review, and you may be  thinking I’m not qualified as a beer reviewer. Well, I know for a fact that no beer review blogger has won the Pulitzer Prize. I haven’t either, so I think that puts us on equal footing. And what beer review blogger also publishes a weekly cartoon about arachnid humor? Hello? Mite Be Funny, remember? I think that definitely gives me a leg up on the competition. Oh sure, there’s Horst Meissner who does his beer review cartoon called Web of Lies featuring spiders discussing beer, but his humor is scarce and pretty dark when you can find it. C’mon Horst, lighten up. You get to drink beer and write about it. Those Germans. They are just so serious, especially about their beer. And did I mention Web of Lies is published bimonthly and not weekly? Mite Be Sporadic.

As for the Soft Parade beer, I liked it, although it is somewhat of a stretch to call it a beer. It is light, fruity, and very smooth with no bitterness at all. It claims to be a very low IBU beer, and that is true. Zero bitterness is noted, and it is as smooth as my chest if I did manscape. Although 4 fruits are fermented, I thought the taste of strawberries stood out, and sure enough, as I read the webpage about it, they note a strawberry aroma. I would add noting a strawberry taste. It is indeed as eminently drinkable as they promote the beer to be on their website, and the 7.5% ABV sure doesn’t hurt its drinkability.

Soft Parade is brewed by Short’s Brewing Company in Northern Michigan, also known as God’s country. Waters are clear, cold and pure up there. Michigan berries of all varieties are just the best, so if Short’s sources water and berries locally, it is no wonder the beer is so good. This would definitely be a good brewery to visit, although I would want to plan for a longer visit than just a day in order to enjoy all the beauty that Northern Michigan has to offer in the summer. Oh, those Michigan beaches! Just incredible. As the days get warmer, I can definitely see buying more than one bottle of Soft Parade at a time. Maybe two next trip to the store!