My July Concertpalooza rolls on with another FREE show, the third freebie in a row. I received free concert tickets from the world’s greatest radio station, 93.1 WXRT in Chicago, to see Heart and Sheryl Crow play Chicago this past week. Neither act is very musically-relevant anymore except in a historical context (Heart definitely being rock ground-breakers as the first hugely successful female-fronted band), but both acts are still making new music, hence this tour.

But before Sheryl Crow took the stage, there was a young opening act. I think she started playing right before we parked the car, and then finished before we took our seats. It was a very long walk from where we parked.

Ours were decent $69 seats (thanks ‘XRT!), but we did have to sit a couple rows behind the guy who likes Five Finger Death Punch AND Heart. That’s quite a range of musical tastes. 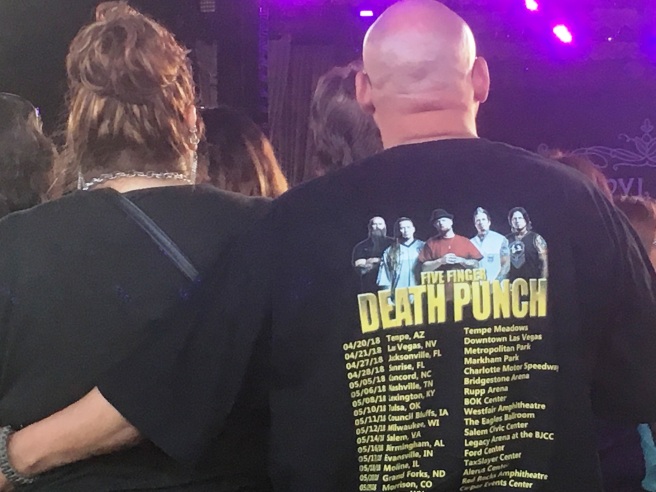 His wife had sunglasses on the whole show, even after dark, and looked a lot like one of the party-goers in this pic from the Rocky Horror Picture Show …

I like to check out an artist’s setlist on setlist.fm, and I wasn’t too impressed by what I saw and therefore expected from Sheryl Crow. Except, she used a whole new setlist that was outstanding. She had the crowd standing for first third of the show. Hey there, Five Fingers Death Punch guy!

Considering the age of the crowd, I knew the standing couldn’t last too long. Too many bad hips and backs in the crowd. We stood along with the rest to catch a glimpse of Crow on stage. 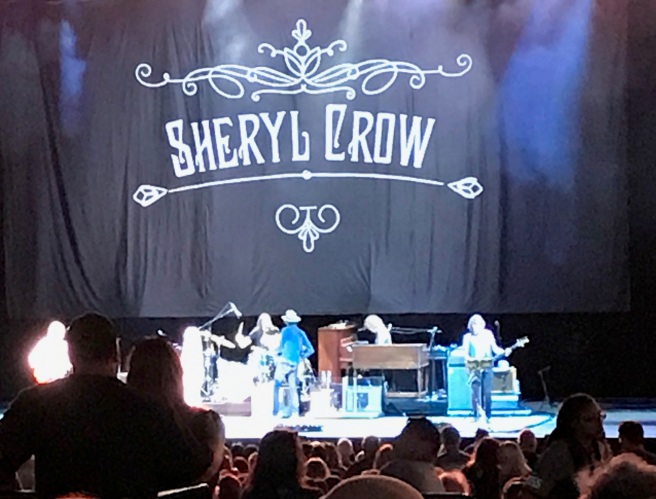 Trust me, she’s there somewhere. She had sparkly pants on that reflected the lights. I think she’s the smaller shiny blur to the left. And if you didn’t want to stand, there were giant video screens all over. Hey, there she is. Looking good, Sheryl. 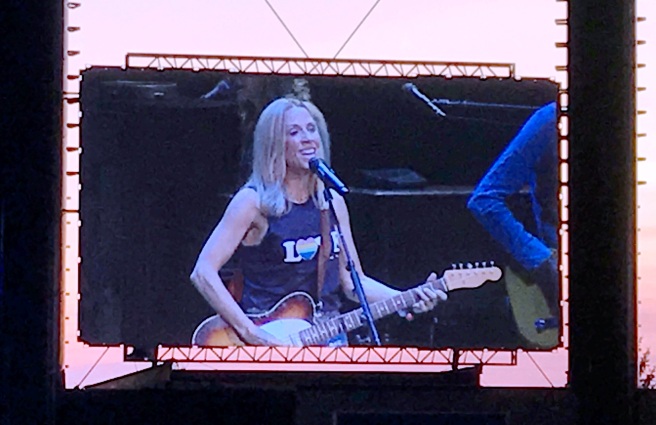 An older couple near us was wearing his & hers Heart Love Alive Concert Tour shirts, and the guy took video of one of the screens for the whole concert. Two takeaways for me:

Crow interrupted her hit parade setlist in the middle to showcase a couple new songs. The first was pure cookie-cutter country and eminently forgettable. The second was interesting. It was a collaboration with guitarist Joe Walsh, and you could hear his influence in recognizable guitar riffs that evoked his James Gang days. And why not? Who remembers the James Gang except me? Good tune.

I got concessions and used the bathroom (not in that order though, gross) between Crow and Heart. The men’s room featured troughs, not urinals. I hate that. I do not like my urine co-mingling with the urine of others. Worse still, women overran the men’s room stalls as the line for their bathroom stretched to the outer edges of the solar system.

While I was gone, I missed the big altercation in our section. My wife told me that some people behind us were complaining because the people immediately in front of them were standing. Imagine that, people standing at a concert. Unheard of! My wife tells me that the security guard resolved the issue by telling all parties that he really didn’t care.

The Heart portion of the concert reminded me of how few Heart songs I really liked after their masterpiece debut album Dreamboat Annie, except maybe for “Barracuda.” And they didn’t play all Heart songs. They covered Led Zeppelin, Simon & Garfunkel, Pink Floyd, Marvin Gaye, and Yes (No!). After 4+ decades, don’t they have enough songs to play? They eschewed playing some of their hits like “Kick It Out,” “Straight On,” and “Heartless,” while playing some dreadful songs like “Mistral” during which singer Ann Wilson vamped across the stage like Stevie Nicks. It didn’t work. She’s almost 70 and my wife swears she was wearing poorly-concealed orthopedic shoes. Nancy Wilson still plays a mean guitar and chipped-in some good vocals.

I took no pics of Heart. I prefer to remember them as displayed on the cover of Dreamboat Annie.

That is a fetching look by Ann, and Nancy still looks very similar today.

My July Concertpalooza ends on July 30th as I see the Spoon/Cage the Elephant/Beck show. Their tour just started and it sounds yummy. I’ll let you know.