As I traveled through central America on business this past week, I encountered a strange food choice. No, not roasted tarantula.

I wasn’t in Central America, but central America. Yes, St Louis again. Sigh! I was at the counter of a Jack in the Box fast food restaurant. Although that is a misnomer as I have found that fast food outside of greater Chicagoland is not really fast. In Chicago, we expect someone to be holding our bag of food next to the counter person BEFORE we even place our order. Once I get outside the greater Chicago area, life slows down a bit and I have gotten used to waiting for my “fast” food.

And wait I did at this Jack in the Box. All hell was breaking loose as I waited for my fish sandwich with about 15 other people waiting for their food. At one point, the counter dude yelled out “Who’s angry and wants a refund?” While I waited bemusedly, my eagle eyes spotted this sign about 10 feet directly in front of me at the counter … 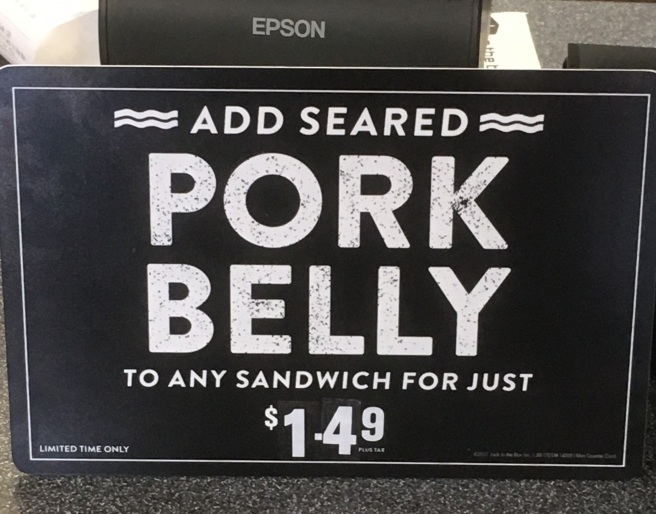 Is that really an edible thing that people eat? I don’t even know how to sear food. For all I knew, that could mean raw pork belly. To the internet! I found pork belly described as “a fatty slab of meat that is sometimes cooked.” Since I have never seen a slim pig, I took this internet description as true. By “sometimes cooked,” does that mean that sometimes humans get brave enough to cook this belly fat for purposes of eating, or is it sometimes cooked while normally just served raw? That was irrelevant since this fat was seared. That is cooked, right? Back to the internet again. Searing is supposedly cooking so that “the surface of the food (usually meat, poultry or fish) is cooked at high temperature until a caramelized crust forms.” Hmmm, they mention meat, poultry or fish, but not a slab of fat.

Don’t people normally cut the fat off meat before eating. This adding of fat to one’s meat sounds like a bad idea. Since I don’t eat meat, I passed on the slab of caramelized fat this time. Maybe next time. Likely not.